Jorge Zubizarreta, 50, a Miami real estate broker, said he has been trying to get his civil rights restored for 12 years. Steve Bousquet Tampa Bay Times 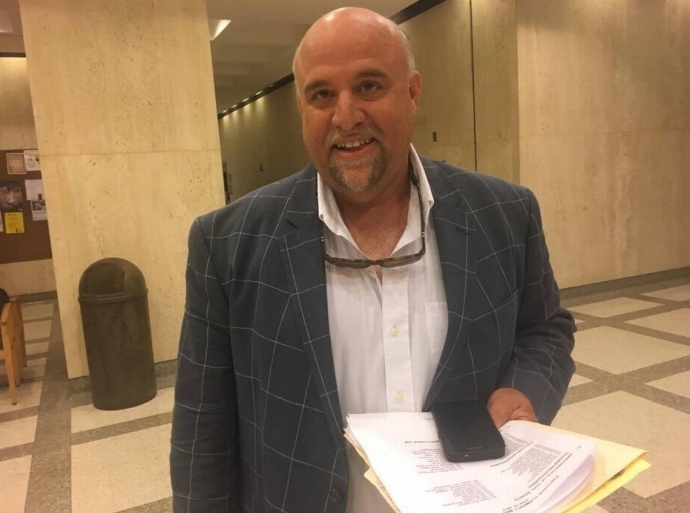 Adam McCracken has a Ph.D., practices psychology in Orlando and is married with two sons.

But for 25 years, the state of Florida said he couldn’t be a full-fledged citizen because of a long-ago drug conviction.

McCracken served 10 months in a federal prison and five years on probation for possession with intent to distribute LSD.

The case is so old that a Google search turns up nothing.

The state of Florida allows McCracken to practice psychology.

But he can’t vote.

A law-abiding citizen for 26 years, he wants to bury his past. But the state won’t let him.

Florida is one of three states that permanently revokes the civil rights of anyone convicted of a felony, a system that has disenfranchised an estimated 1.5 million people.

Even after felons complete their sentences, pay their fines and serve probation, they must wait at least five years to ask the state to restore their rights, and that can take a decade or more.

Most people don’t bother. Many who try will die before their cases are heard.

McCracken, 47, is one of the lucky ones.

He regained his rights at a hearing in June before Gov. Rick Scott and the three elected Cabinet members, who meet every quarter as the state Board of Executive Clemency.

“That’s a lot of drugs,” Scott said, glancing at McCracken’s paperwork before voting to give him back his right to vote after his wife, Renee, spoke of how he helps children and adults cope with psychological issues and works to be a positive role model for his sons.

McCracken, the psychologist with the engaging smile, is one of tens of thousands of Floridians who are in a silent civil rights struggle in the nation’s third most populous state.

There are no sit-ins, demonstrations or rousing speeches from political leaders.

Only the agonizingly slow process of begging the state’s leaders for mercy — in public and on live television.

“It’s ridiculous,” McCracken said. “I just want to be able to vote.”

Four times a year, Scott and the Cabinet consider requests by fewer than 100 people at a time to restore their right to vote, run for office or own a gun.

But with more than 20,000 people trapped in the clemency pipeline, and with a governor and Legislature unwilling to hire more people to review cases, the backlog will last forever.

Former Gov. Charlie Crist led an effort in 2007 to give amnesty to many felons, who regained their civil rights without hearings.

But Scott and his fellow Republicans changed the law in 2011 to make it harder for felons to regain their rights.

Jorge Zubizarreta, 50, a Miami real estate broker, said he has been trying to get his civil rights restored for 12 years. Steve Bousquet Tampa Bay Times

The backlog is growing once again, and the struggle is harder than ever.

Jorge Zubizarreta, a 50-year-old real estate agent from Doral, also regained his civil rights in June after 12 years, following a conviction for cocaine use.

He drove to Tallahassee and waited until his number was called.

“I broke the law,” Zubizarreta said. “But for 12 years, to take away my rights, is a bit much. I’m an American. I think in America it’s my privilege to be a voter.”

It’s all up to Scott

As governor, Scott is the deciding factor in every case.

By law, he must be on the prevailing side of all decisions.

With its intrusiveness, the civil rights restoration process forces Scott to deal with constituents in a unique way. But he often shows a softer, more human side as he intently poses personal questions.

“Do you still drink?” Scott asks. “Do you use drugs? Are you married?” Scott will ask a child: “Is he a good dad?”

‘Do you still drink? Do you use drugs? Are you married?’ Those are questions Florida Gov. Rick Scott often asks felons when they appear before the clemency board seeking restoration of their civil rights. Chris O'Meara AP

But if Scott is not personally convinced that someone is reformed, that person is denied full citizenship.

Scott is not required to explain his votes.

Every aspect of the clemency process is secret, as Dale Werhan discovered in June.

Werhan was convicted of manslaughter by culpable negligence and DUI causing property damage after a 1994 crash on Interstate 10 in which his pickup broke down after a night of drinking in Pensacola and Gulf Shores, Ala.

Rather than push his truck off the road, Werhan shut off all the lights. A tractor-trailer driver struck it and was killed.

At his hearing, Werhan appeared contrite, but Scott couldn’t make up his mind and said he would “think about it.”

Then, turning to Attorney General Pam Bondi, his microphone still on, Scott whispered: “That’s how my uncle died.”

One of the four people who decides clemency petitions is Agriculture Commissioner Adam Putnam, the leading Republican candidate for governor.

Putnam supported the 2011 decision to require most felons to wait for five years before they can petition the state for their rights.

Asked how he sits in judgment of his fellow citizens, Putnam said: “The factors are how long they’ve been crime-free, what the original crime was, the identification of something that has clearly changed in their life and evidence of stability — law-abiding factors.”

One by one, they stand before Putnam, Scott and two other Cabinet members, seeking mercy and a fresh start.

They apologize. They express shame and regret. They talk about their homes, families and businesses, or how they want to be able to own a gun again so they can take their grandchildren hunting.

The loss of civil rights also includes a denial of the right to own a firearm.

Freed from prison in 2002 after a drug conviction, Moreland married, built three businesses and owns a home.

But he still couldn’t vote.

In case after case, Scott asks these strangers about their use of alcohol or drugs.

Florida excludes more former felons from voting than any other state because of its restrictive restoration of rights laws. Miami Herald/Times Tallahassee Bureau

Scott has cited the fact that his brother’s substance abuse problems was a factor in his decision to veto a bill that would have let retailers sell hard liquor.

“Right before I was arrested,” Moreland said. “Probably December of 1999.”

It took less than a minute for Scott to make a motion to restore Moreland’s rights.

But getting the hearing took 15 years.

After years of grass roots organizing, the Florida Rights Restoration Coalition is leading a statewide petition drive to change the Constitution to restore voting rights to most felons after they complete all terms of their sentences, including parole or probation.

People convicted of murder or sex offenses would not be eligible.

The group will hold a convention in Orlando next weekend and will have workshops on messaging, phone banking, canvassing and collecting petitions.

“We have only just begun,” coalition president Desmond Meade told convention attendees in a letter. “We must ramp up our petition circulation efforts.”

After collecting 10 percent of the necessary signatures and having its ballot language approved by the state Supreme Court, the coalition and its political arm, Clearwater-based Floridians For a Fair Democracy, are hiring people to gather petitions all over the state.

“It’s been easier than I thought it would be,” said McCracken (no relation to Adam). “People hear ‘ex-felon’ and they think of someone they know. If they listen all the way through, they’ll sign.”

The effort has a long way to go. Supporters must collect 766,200 valid signatures in a majority of Florida’s 27 congressional districts. The deadline is Feb. 1, 2018.

If the proposal gets on the November 2018 ballot, 60 percent of voters would have to approve.

McCracken, 22, recent graduate of Ohio University with a psychology degree, moved with a classmate to St. Petersburg, where she’s trying to change the Florida Constitution, one signature at a time.

“It’s crazy,” she said of Florida’s system. “Ohio is nothing like this.”