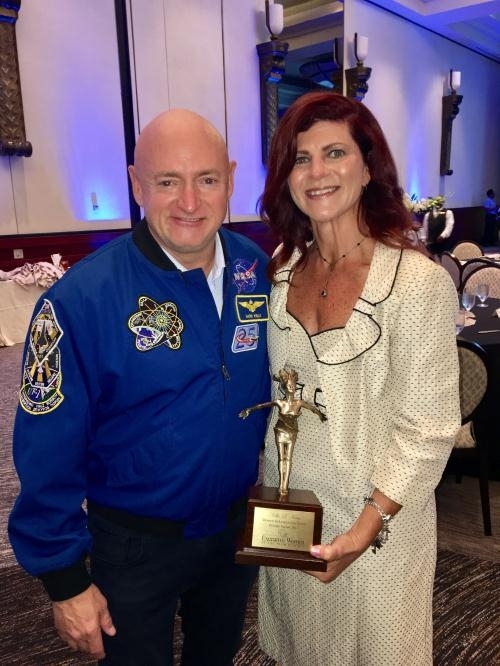 West Palm Beach Criminal Defense Lawyer Nellie L. King Honored for Her Role in President Barack Obama's Historic Clemency Initiative. FACDL Past President Nellie L. King, featured with keynote speaker, NASA astronaut Captain Mark Kelly, after receiving the Women in Leadership Award, Private Sector, from the Executive Women of the Palm Beaches on May 11, 2017.  King received the award for her efforts in recruiting Florida lawyers to assist in drafting petitions for Clemency Project 2014, her mentorship of women lawyers, and her leadership in national, state, and local criminal justice organizations.

/EINPresswire.com/ -- Florida criminal defense lawyer Nellie L. King received the Women in Leadership Award, Private Sector, from the Executive Women of the Palm Beaches on May 11, 2017, at the Kravis Center for the Performing Arts in West Palm Beach, Florida. King was honored for her role in President Barack Obama's historic clemency initiative, which sought to right the wrongs of minimum-mandatory sentencing policies.

The Obama Administration announced its intent to balance past sentencing inequities through clemency review after a shift in more recent federal policy lowered sentences for certain drug offenses. Working through Clemency Project 2014, a work group including the National Association of Criminal Defense Lawyers, the American Bar Association, the American Civil Liberties Union, and defender organizations, King’s role was in the recruitment of volunteer lawyers to draft petitions for submission to the White House. In total, 1,715 men and women were granted clemency as a result of President Obama’s initiative. King shared the results of this clemency effort with event attendees: “The savings in financial terms is estimated at $ 427,000,000. More importantly, the human capital savings estimate is the most staggering: considering an 80-year life span, 13,665 years were reduced, allowing these men and women to be reunited with their families. Many of them had been sentenced to life in prison despite having little or no prior criminal history and they simply had no hope.”

Motivated by the “monumental, longstanding injustice of draconian sentencing guidelines and the disparate racial impact the war on drugs had on minority communities,” King called on community leaders to continue to examine policies which result in the mass incarceration of thousands of American citizens for nonviolent drug offenses.

In nominating King for the Women in Leadership Award, attorney Eunice Baros stated, “Nellie is a change-maker and her mark on this community is deep… she sincerely believes her job also entails changing the system through passionate advocacy, a commitment to volunteerism, and via mentorship of young lawyers who likewise aspire to facilitate change.”

Nellie L. King is a noted criminal defense lawyer and lecturer, a prominent community advocate, and a leader who has held local, state, and national roles. King is a Past President of the Florida Association of Criminal Defense Lawyers and currently serves on the Boards of the National Association of Criminal Defense Lawyers and Boys Town South Florida. King is also a member of the Palm Beach County Criminal Justice Commission. For further information contact the Law Offices of Nellie L. King at  561-833-1084.

This press release can be viewed online at: http://www.einpresswire.com

Disclaimer: If you have any questions regarding information in this press release please contact the company listed in the press release. Please do not contact EIN Presswire. We will be unable to assist you with your inquiry. EIN Presswire disclaims any content contained in these releases.