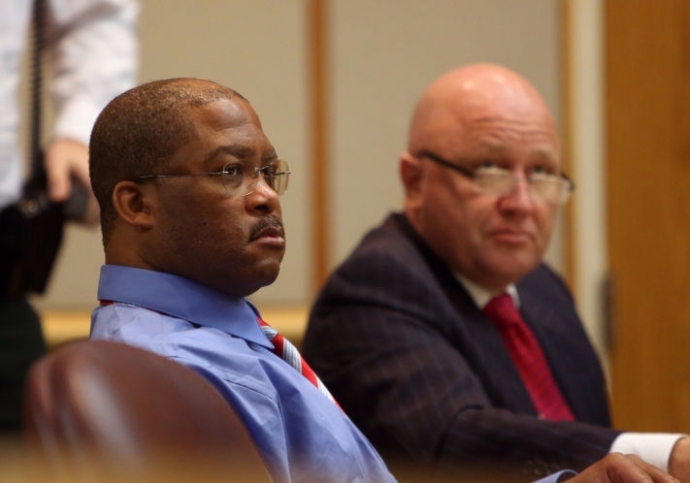 The Florida Supreme Court overturned the conviction and death sentences Thursday of Ralph Wright Jr., exonerating the former Air Force sergeant of the 2007 killings in St. Petersburg of his ex-girlfriend and their baby boy.

There was not enough evidence to prove that Wright killed Paula O'Conner and 15-month-old Alijah, the court ruled.

"Although the facts established at trial support a strong suspicion of guilt, they are not inconsistent with innocence," the justices wrote in a unanimous opinion. "We therefore conclude that the evidence is insufficient to sustain Wright's convictions."

The case will be sent back to Pinellas-Pasco Circuit Court with instructions that Wright be acquitted of the two murders.

Wright, 48, was convicted by a jury in 2013 and sent to death row a year later by Circuit Judge Thane Covert.

Wright was stationed at MacDill Air Force Base in Tampa when he met O'Conner on a dating website. He was married, but told her he was divorced. He would disappear for long periods, telling her he was on secret missions for the Air Force, according to court records. The couple became engaged, but Wright became distant after O'Conner became pregnant with Alijah.

He did not believe he was the boy's father and rebuffed O'Conner's efforts to get him to support their child, records stated.

On July 6, 2007, O'Conner and her son were found dead in their home. She had been strangled; her baby had been suffocated.

Much of the state's case centered on a single black glove that was found at the crime scene. The glove was the same kind that had been issued to Wright's military unit. But analysts who processed the gloves for DNA couldn't find any that was a definitive match for Wright. It was also unclear whether the glove came from MacDill.

No other physical evidence linked Wright to the crime scene.

O'Conner's sport utility vehicle was found the day of the murders at an apartment complex about a half-mile from her home. Investigators found no fingerprints or other forensic evidence matching Wright in the SUV.

Detectives determined the killings happened between 5:30 and 6:15 a.m. At 7:53 a.m., Wright visited a Starbucks coffee shop near the air base in Tampa, a 19-minute drive over the Gandy Bridge from O'Conner's home. She lived in the Edgemoor area of St. Petersburg. But there was no evidence that Wright had been in Pinellas County that morning.

The state argued that Wright committed the killings to avoid paying child support and to continue his "bachelor lifestyle."

But the defense argued that there were other viable suspects, including O'Conner's teenage daughter, Victoria "Tori" Christopher, with whom she had a sometimes-turbulent relationship.

In its opinion, the Supreme Court noted that the day of her mother's funeral, Christopher applied to claim more than $500,000 in life insurance. After she got the money, she spent it all in about 18 months, according to the court's written opinion.

Christopher could not be reached Thursday for comment. Neither could a spokesman for the Pinellas-Pasco State Attorney's Office.

"I'm very happy for him and his family," said Bjorn Brunvand, one of the attorneys who defended Wright at trial. "I'm hopeful that in the next month or so he'll be released and can be a free man."

The attorney explained that prosecutors can ask to have the Supreme Court hear the case again. If they do not, there will still be a delay before the decision becomes final.

"The bottom line is when someone is prosecuted for a crime like this, their lives are just in ruins by the time it's over with," he said. "They lose everything they have. … It remains a huge shadow over their lives."

Wright's was one of several death penalty cases on which the Supreme Court ruled Thursday, but the only one in which it tossed out a defendant's conviction.

Earlier, the court overturned the death sentence of Khalid Pasha for the 2002 murders of his wife and her 20-year-old daughter in Hillsborough County.

But that simply sets the stage for Pasha to be resentenced.

Pasha, 73, was convicted twice in separate trials for the killings of Robin Canady, 43, and her daughter, Reneesha Singleton. The bodies of both women were found the night of Aug. 23, 2002, in a remote cul-de-sac in the Woodland Corporate Center on Waters Avenue. Their throats had been slashed.

The court ruled that Pasha's sentence was unconstitutional because a jury's 11-1 vote for the death penalty was not unanimous, as is now required.