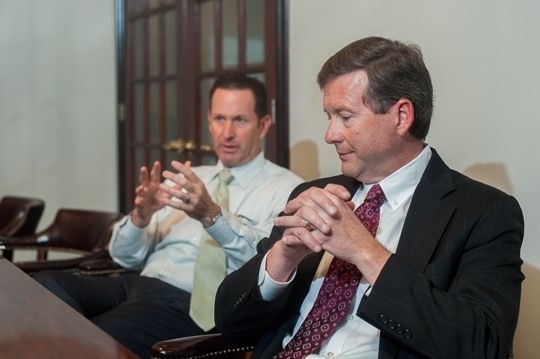 - Attorney Mitch Stone said the Florida Attorney General's Office has decided not to re-try Kelly Mathis in the Allied Veterans of the World case.

Once one of Jacksonville's highest-profile attorneys, Mathis was the only one of 57 defendants in the 2013 case to go to trial. He was convicted on dozens of counts of racketeering, and sentenced to six years in prison, but was allowed to post an appeal bond and the conviction was overturned last year.

The 5th District Court of Appeal previously denied a request by the State Attorney General's Office for a rehearing on the court's decision to throw out the 103 gambling-related convictions against former Mathis and to order a retrial.

The Attorney General's Office also asked the Florida Supreme Court to reinstate the conviction, but it refused.

Mathis contended throughout the case he was not involved in the operation of the business. He only served as the lawyer for Allied Veterans. He had vowed to continue to fight to clear his name.

The statewide case prompted changes in Florida law regulating internet gaming and the resignation of Gov. Rick Scott's first lieutenant governor, Jennifer Carroll, who appeared in a commercial promoting Allied Veteran's of the World prior to her election to the post.

Prosecutors had called Mathis the mastermind of what was described as a $300 million gambling ring operated through dozens of internet cafes operated by Allied Veterans of the World. But his conviction was overturned last month.

"After much consideration, I decided to dismiss pending charges against Kelly Mathis," said Statewide Prosecutor Nick Cox. "Since this case started, the gaming laws have changed and the Allied Veterans Corporation has been put out of business. The Office of Statewide Prosecution's current priorities are fighting synthetic drugs, illegal opioids, human trafficking and gang violence. I feel that we should focus our resources on these priorities for the best interest in the state of Florida."

Allied Veterans operated dozens of internet cafes that were raided and shut down in 2013 because of illegal gambling. Mathis had given legal advice to the Allied Veterans group, assuring the members that the activities were legal.

Investigators said the group, formed as a nonprofit, was a money-making scheme that used internet cafes and gambling to make hundreds of millions of dollars.

In an 11-page October opinion a panel of the 5th District Court of Appeal said Mathis, a former president of the Jacksonville Bar Association, "dealt with Allied Veterans solely in the scope of an attorney-client relationship" and said a circuit judge improperly barred Mathis from presenting evidence that could have showed he was doing legitimate legal work -- rather than aiding an illegal operation.

See What Mitch Stone had to say HERE